At Westlake Aesthetics & Wellness we offer the latest advancements in body contouring. Whether your goal is to burn fat, define muscle or target stubborn cellulite, our team of skilled providers can help you reach your goals. Schedule a complimentary consultation below:

I WANT MY DREAM BODY

EMSCULPT NEO is the first and only non-invasive body shaping procedure that provides simultaneous fat elimination and muscle building in a combined 30-minute session.

EMSCULPT NEO builds off the legacy of its predecessor, EMSCULPT,by simultaneously emitting both radio frequency and high intensity electromagnetic energies.

HOW DOES IT WORK?

EMSCULPT NEO is based on an applicator simultaneously emitting synchronized RF and HIFEM+ energies. Due to the radiofrequency heating, the muscle temperature quickly raises by several degrees. This prepares muscles for exposure to stress, similar to what a warm up activity does before any workout. In less than 4 minutes, the temperature in subcutaneous fat reaches levels that cause apoptosis, i.e. fat cells are permanently damaged and slowly removed from the body. Clinical studies showed on average a 30% reduction in subcutaneous fat.* 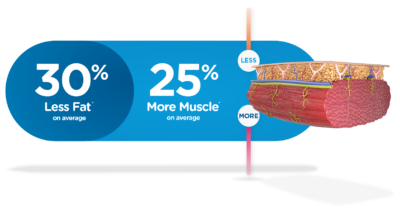 HIFEM+ energy contracts the muscle fibers in the area at intensities that are not achievable during voluntary workout. Extreme stress forces the muscle to adapt resulting in an increase in the number and growth of muscle fibers and cells. Clinical studies have shown  a 25% growth in muscle volume on average.

WHAT AREAS CAN BE TREATED? 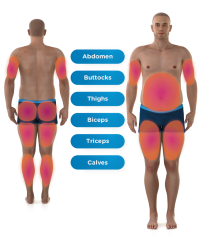 REACH YOUR GOALS WITH EMSCULPT NEO.

EMTONE is the first and only device that simultaneously delivers both thermal and mechanical energy to treat all major contributing factors to cellulite.

HOW DOES IT WORK?

Cellulite is a multi-factorial problem. Women are told fibrous bands run from skin to muscle through the fat. When the bands pull downward on the skin, the fat pushes upward. But there is more to the story…

EMTONE simultaneously emits both radiofrequency and targeted pressure energy. Combined there is a synergistic effect that neither technology can achieve on its own.

WHAT AREAS CAN BE TREATED?